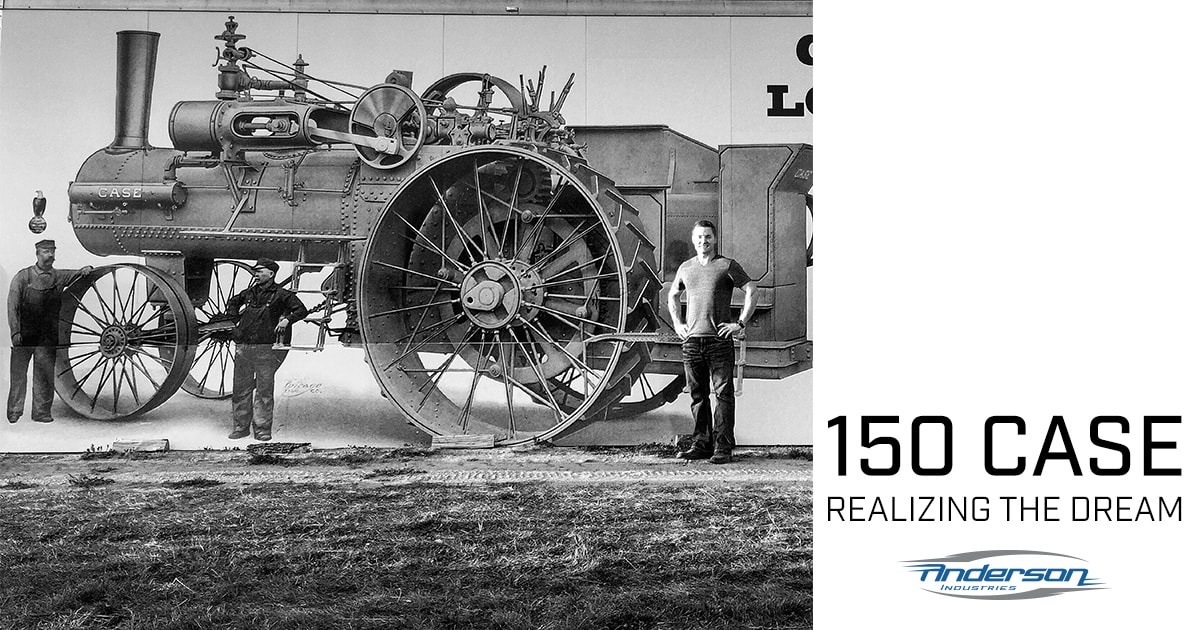 I was just 10 years old when I first met George W. Hedtke of Davis Junction, IL. He arrived at our place in Andover, SD driving an old flat deck truck carrying the remains of the largest steam traction engine boiler I had ever seen. He was staying with us for a couple days before taking the boiler to Rollag, MN for the CASE expo. My dad, Kevin and friend and mentor Jim Briden were spending a couple days doing an “organ transplant” as George called it on that large boiler. I remember asking George as a little boy why he brought just that boiler to a CASE expo, was that all he had?  Once I found out that boiler was for the Titanic of Tractors, the 150 HP Case Road Locomotive, I agreed it justified the long trip.

The boiler had the back end cut out of it when it was used as a water tank in New Mexico. So my dad and Jim cut the back end out of a bad 65 HP Case boiler from an engine I later restored when I was 18 and “transplanted” it into that 150 boiler. For a number of years, George would come to our place, and I would ride up with him to the show in Rollag, MN.  Those who met Mr. Hedkte know that he was never short of good stories! The stories that intrigued me the most though were about that 150 Case and about the engines that were sent to Kansas pulling great loads. Of course they had their fair share of trouble, but that is to be expected when you are pioneering what has never been done before.

Ever since hearing these stories, it became a dream of mine to one day re-create this iron giant. In high school I restored a 65 HP Case engine that really helped me understand the mechanics and how steam engines operated and how to work on them. Through the process my dad taught me a lot about rebuilding parts and the process to put together a sound performing engine. I decided to go to NDSU and study Mechanical Engineering. The process of restoring the 65 Case had intrigued me on the mechanics and engineering side. I also really just wanted to go to work to learn from Jim Briden at Larson Welding & Machine in Fargo, ND. Jim had taught me a lot over the years, and I wanted to learn more about welding and machine work as I knew that would be a requirement to building the largest steam tractor from scratch.

I didn’t really like school, most of my notes from class comprised of designs of my dream shop that I wanted so I could build the 150 Case. In 2006, I started Anderson Industries from my garage where I started making foundry patterns for a local foundry 20 miles away. Initially it started with my own patterns for our steam projects, then grew to making steam and tractor parts for friends, to doing full time pattern work for Dakota Foundry customers.

The 150 project started rolling in 2006 when I made a trip out to Racine, Wisconsin to the Case archives. There I met Rich Tworek who, with some other great people from Case, spent a lot of time and effort to preserve the history. He showed me where all the old drawings were stored and I paged through thousands of prints and got copies of the 150 Case drawings. It felt like at that point that we were half-way done.  That feeling soon wore off.

Once I got back I spent the next 2 years of nights and weekends creating 3D CAD models from the original drawings. In 2008, I started making wood patterns beginning with the cylinder head. Over the next years we would make a few patterns when we had some extra time on a machine. It was a great challenge to build a business from start-up to fund the project and make progress on the engine all at the same time. So things didn’t move as quickly as I would have liked, but I am happy with where the company and our team is today as a result of a dream to build a steam engine.

My dad was a great help to keep momentum going on the project when he purchased a new boiler for the 150 Case built by Jonas Stutzman in Middlefield, Ohio. Seeing the boiler sitting there gave me another shot in the arm to keep things rolling.

The next critical step in the project was in 2014 when the manager, and a good friend of mine, told me that they were selling the foundry that I had worked with for 8 years. That scared me half to death when I found out it was maybe getting sold to a company from Taiwan and then I would have no way to cast the parts to finish this steam engine. So in September of that year I purchased the foundry.  Besides securing our chance to build the 150, it has been a great business. It really would not be possible to do this project without the incredible team of people we have in Dakota Foundry and Anderson Industries.

It was early in 2017 when I thought about all the great steam engine friends that are unfortunately no longer with us. It was then when I realized that this project is for them and all amazing friends in the steam engine hobby to appreciate. At that point I thought I have the rest of my life to work, we now have the team and resources to do this project so we need to get after it.

That spring I asked a very close friend of mine Gary Bradley of Sheridan, WY if he would be interested in helping build this engine. After a couple weeks working together in his immaculate machine shop, we decided that if we are going to get this done by 2018 we had to do it out there. Sheridan is about 8 hours from my factories, which is just far enough where I can go out for a week at a time and not have too many interruptions.

As I am writing this letter today, we have nearly all the castings finished and machined for the engine proper. We are just finishing machining the engine frame this week and Jim Briden has just finished machining the flywheel. It was fortunate that Jim could fit that 50” flywheel on this big lathe.  Although when I stopped by one day, he felt like he had a little more flywheel than he had lathe.  But where there’s a will there’s a way, and he got it all machined, broached, and balanced.

The boiler is in the welding shop at Gary Bradley’s.  We have a pile of newly machined castings in the steam engine shed, and I will be making a trip middle of January to bring out the engine frame, rear hubs for the wheels, and flywheel. I will machine the rear hubs and rivet the wheels together at Jim Briden’s using the large squeezer he built. With the engine frame now complete we will be able to start assembling the engine together on a fixture that our welding team in Webster built. The fixture will allow us to assemble the parts together as they would sit on the boiler, Babbitt all the bearings, line bore them, and then finish assembling the engine complete. Then, like George said, we will “transplant” that engine onto the new boiler, mark and drill the holes, and assemble it together.

There are about 250 unique part numbers to make and around 400 parts in total. None of them of course are very light. As of January I would say we are about 60% finished with building parts. The only real significant parts to cast yet are the differential ring gear, intermediate gear, bull gears, and front door. The debut of the 150 Case Road Locomotive will be September 7th, 2018 at the James Valley Threshing Show in Andover, SD. We will have a special unveiling event and an incredible amount of fun, I hope to see you there! 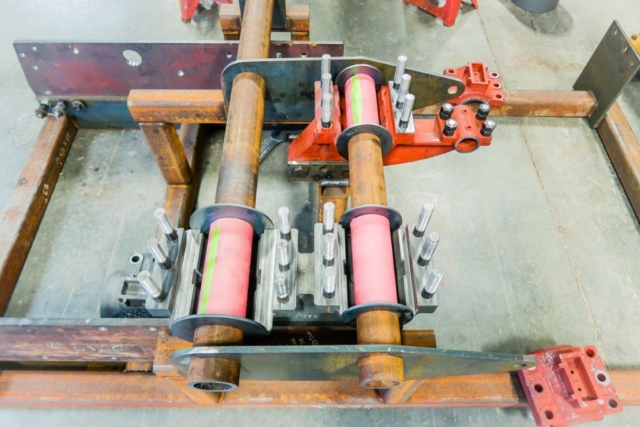 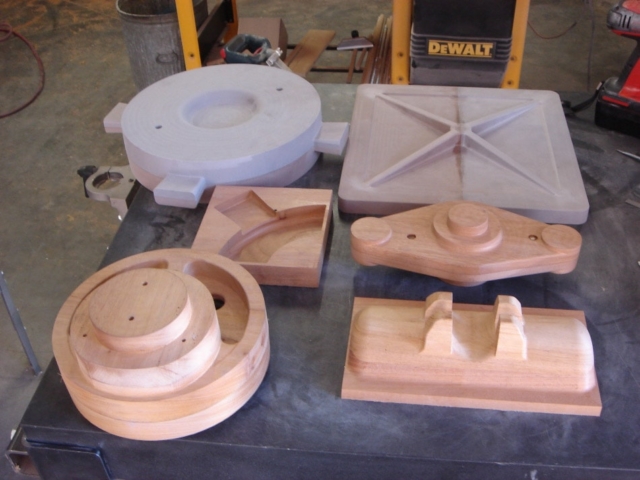 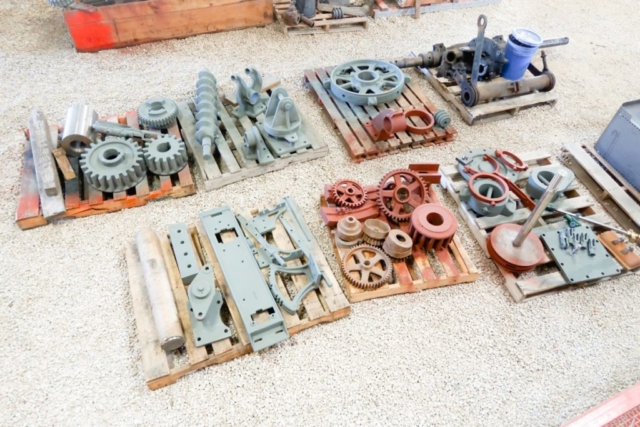 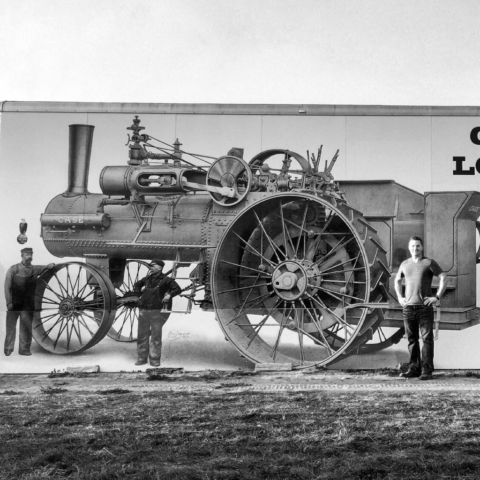 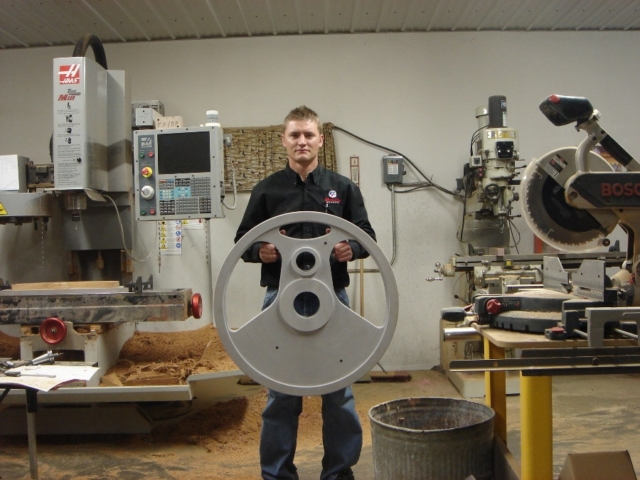 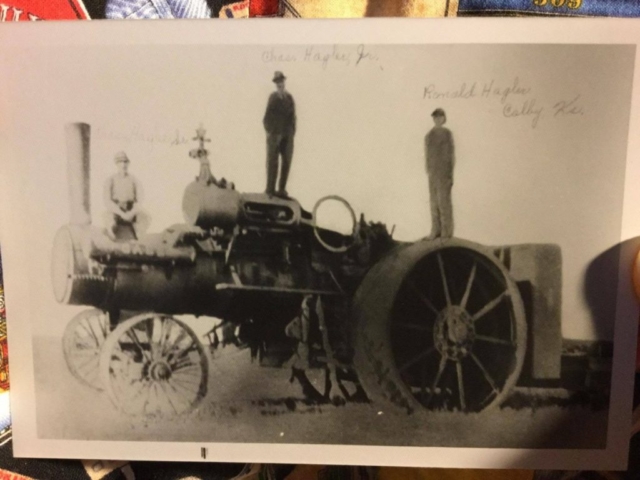 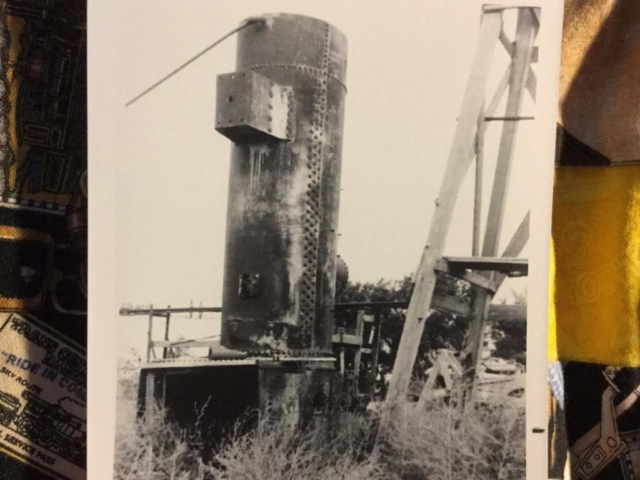 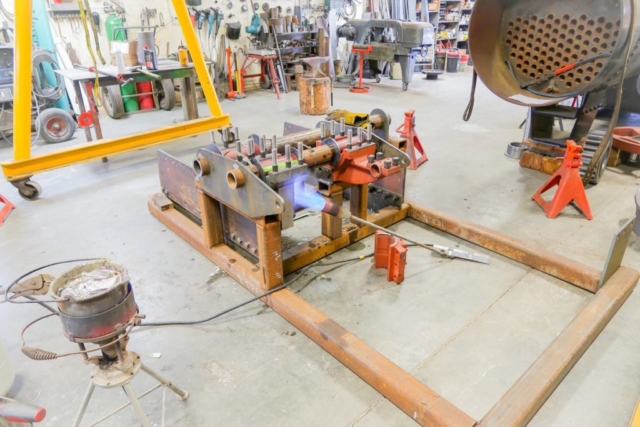 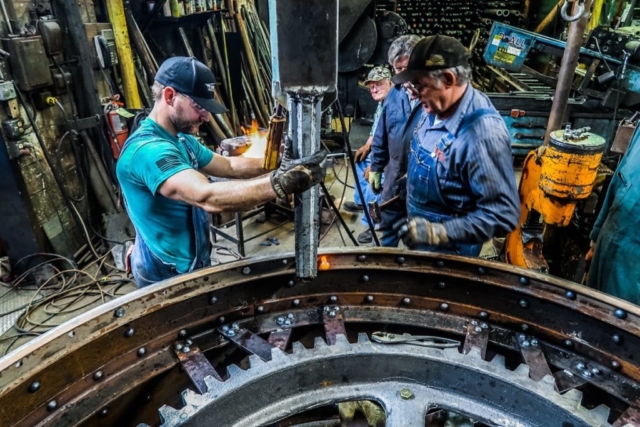 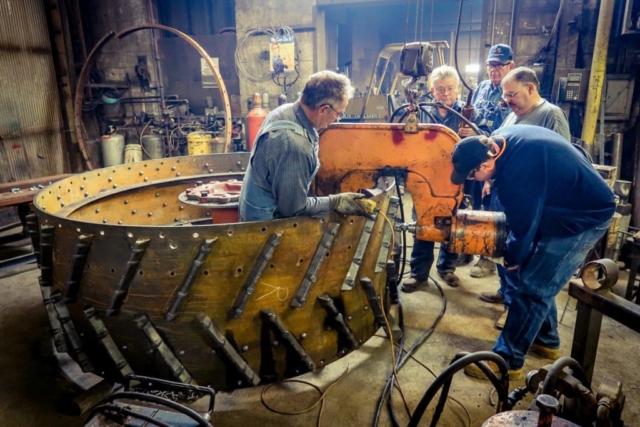 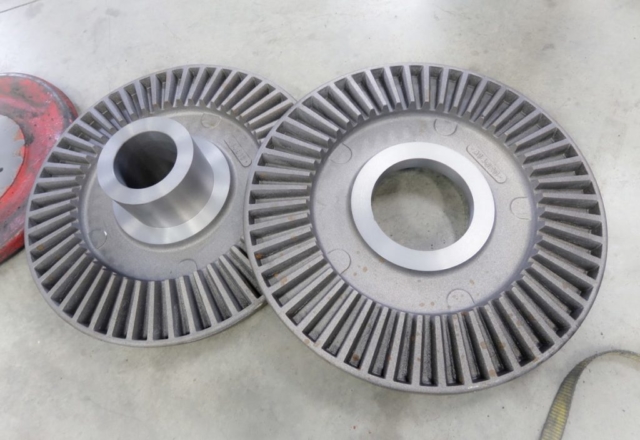 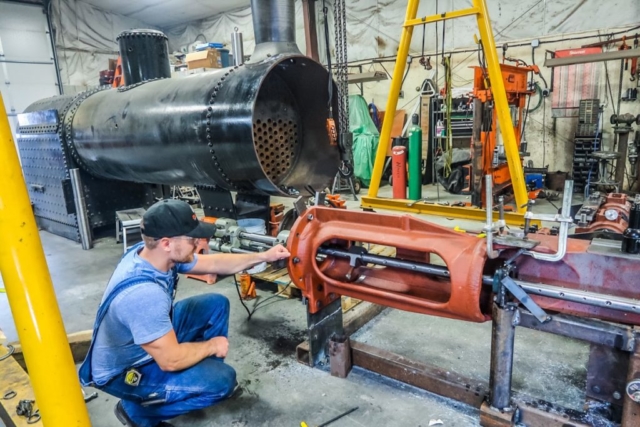 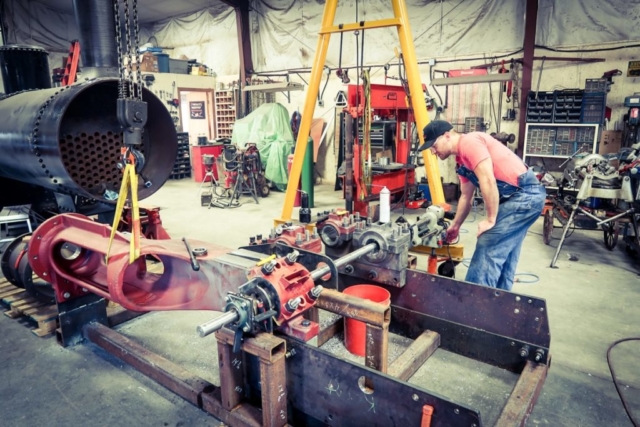 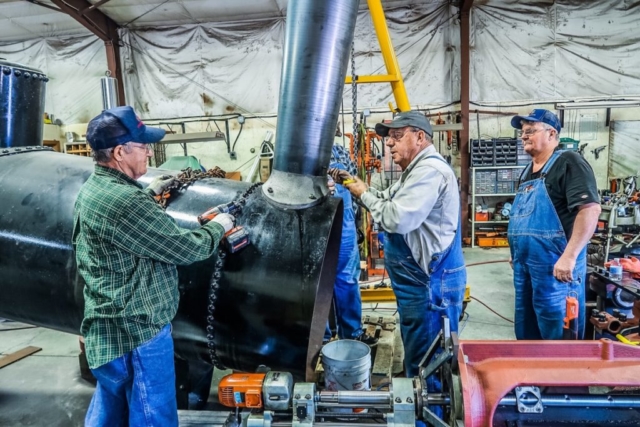 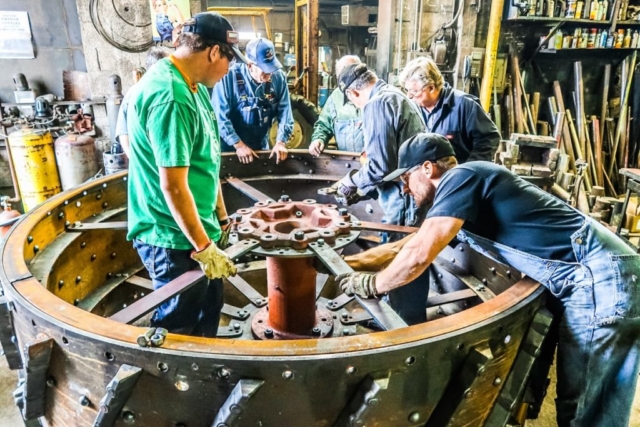 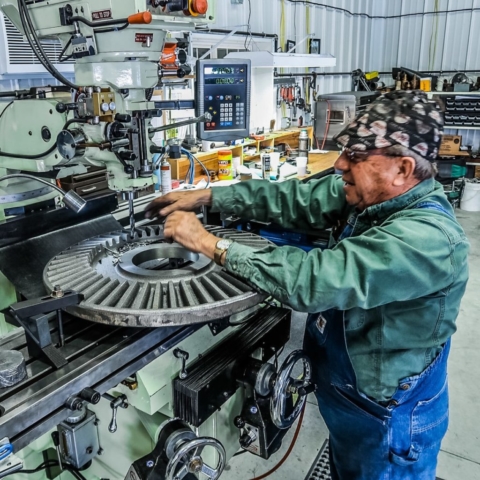 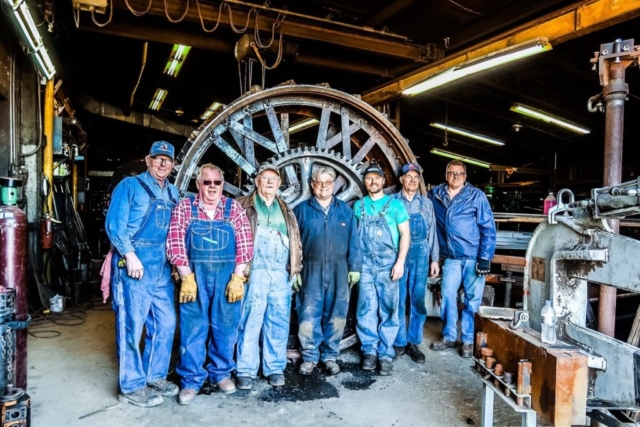 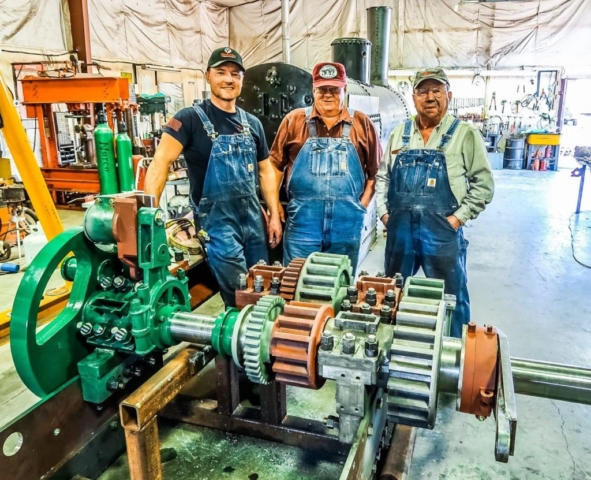 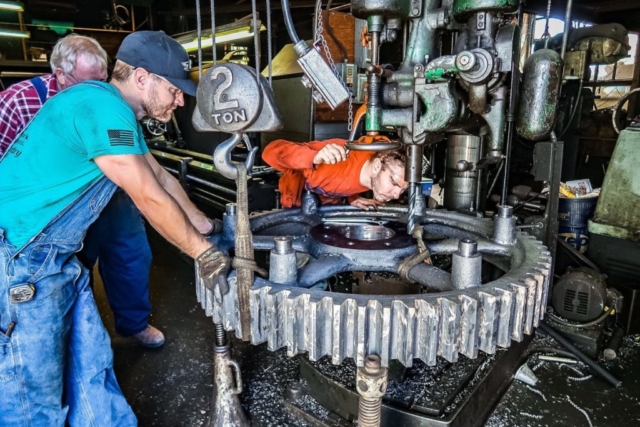 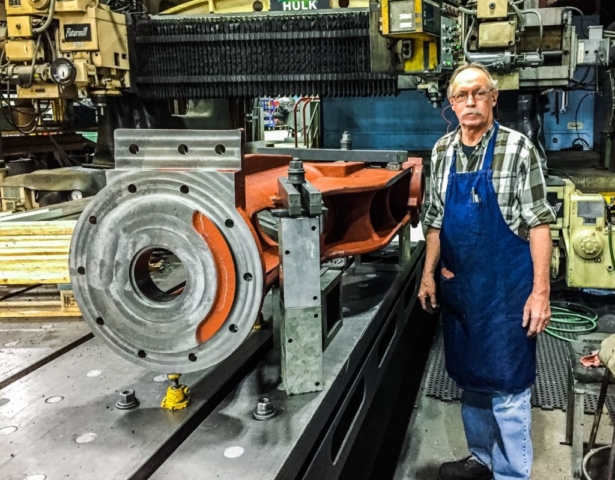